New York (CNN Business)The Federal Reserve’s rate hikes steal all the headlines. But behind the scenes, the Fed is conducting a $4.5 trillion experiment. And it’s unsettling global financial markets.

To revive the economy and the market, the Fed in 2008 took the unprecedented step of gobbling up vast amounts of government bonds and mortgage securities. The program, known as quantitative easing, was aimed at lowering long-term borrowing costs. Foreign central banks joined in as well.
Although economists debate the impact on the real economy, QE acted like a turbo booster for the stock market.

In October 2017, the Fed decided the economy was finally healthy enough to start shrinking its $4.5 trillion balance sheet. So-called quantitative tightening accelerated to $50 billion a month in the fourth quarter of 2018 — precisely when market volatility spiked.

Many market watchers believe that the balance sheet shrinkage — it’s down $500 billion from the peak — has at a minimum contributed to turbulence in financial markets.

“Once the Fed started quantitative tightening, the global stock market tipped over right on schedule,” legendary investor Jeff Gundlach said on Tuesday during a webcast.
“There is an eerie correlation,” said Gundlach, the founder of investment firm DoubleLine Capital. 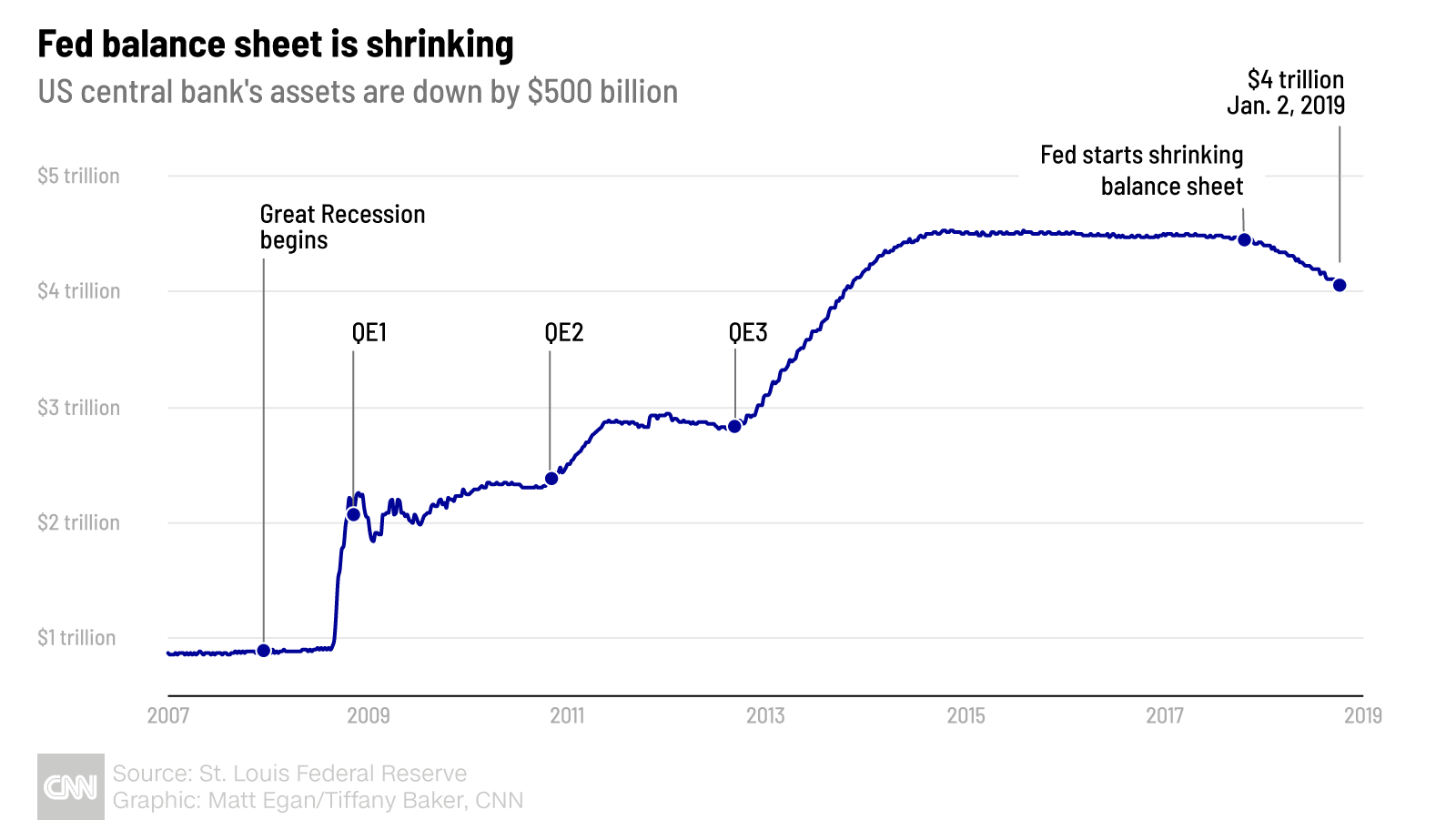 Even Trump tweeted about QT

Global central banks, including the Fed, collectively purchased $9.1 trillion of assets between 2010 and 2017, according to Bank of America Merrill Lynch. That phenomenon encouraged investors to plow money into credit funds, lowering borrowing costs and juicing stock prices.
But that powerful trend reversed in 2018, with global central bank balance sheets shrinking for the first time since the crisis, Bank of America said. Not surprisingly, it was the US stock market’s worst year in a decade.
And it’s no coincidence that the junk bond market has shut down. December marked the first month without a US high-yield bond being issued since November 2008, according to Dealogic.

Even President Donald Trump has vented about QT. “Don’t let the market become any more illiquid than it already is,” Trump tweeted to the Fed on December 18. “Stop with the 50 B’s. Feel the market, don’t just go by meaningless numbers.”

The wave of selling on Wall Street was set off by fears of a recession, concerns about the US-China trade war and worries the Fed was raising rates more quickly than the economy could handle. Improvement on all three fronts have since unleashed a huge comeback in the stock market.
“If you rounded up all the obvious suspects to explain the selloff, I’d say the No. 1 suspect would be the Fed,” said Ed Yardeni, president of investment advisory Yardeni Research.

In hindsight, Yardeni said that the Fed added to investor angst by trying to simultaneously raise rates while significantly shrinking the balance sheet.
“Doing both backfired on them — and forced them to pause on raising rates,” he said.

Of course, some think the focus on the balance sheet is misplaced — especially because the real economy looked solid in recent months.
“We got spoiled with no volatility and the market going up. Now we’re seeking answers,” said Andres Garcia-Amaya, global market strategist at Zoe Financial, an independent wealth management firm.

Powell did a ‘full capitulation’

Still, Wall Street has clearly become much more sensitive to news about QE.
Consider how markets became unhinged on December 19 during Fed chief Jerome Powell’s press conference. In particular, investors got fixated on Powell’s comment that the balance sheet runoff would continue on “autopilot.” The Dow closed down 352 points that day, wiping out an early rally of as much as 382 points.

It became such a big issue that Powell later walked back his comments. On January 4, Powell pledged patience and flexibility. He even opened the door to tweaking the balance sheet strategy — if warranted.

“We don’t believe that our issuance is an important part of the story of the market turbulence that began in the fourth quarter of last year,” Powell said. “But, I’ll say again, if we reached a different conclusion, we wouldn’t hesitate to make a change.”

Why the Dow has spiked 2,000 points since Christmas Eve
Powell’s soothing words, along with a blockbuster jobs report, helped carry the Dow 747 points higher that day.

“Jay Powell did a full capitulation,” Gundlach said. “The markets have been throwing a party since then.”
The Dow has spiked more than 2,100 points, or nearly 10%, since Christmas Eve.

Peter Boockvar, chief investment officer at Bleakley Advisory Group, said it’s all part of a vicious circle between markets and the Fed after a decade of ultra-easy money.

Still, it’s sensible policy for the Fed to try to shrink its holdings. Historically low rates and a huge balance sheet give the central bank limited ammo to fight the next recession, which investors increasingly fear is around the corner.
The market’s sensitivity to the Fed’s balance sheet is a fresh reminder that this is all a grand experiment. No one really knows how it will turn out.